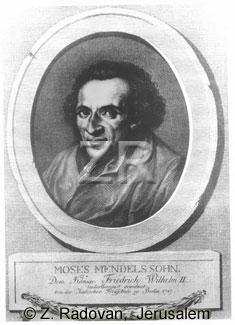 4754. MOSES MENDELS SOHN (1729?86) Jewish philosopher, literary critic, and biblical scholar, born in Dessau, EC Germany. A zealous defender of enlightened monotheism, he was an apostle of deism. His major works include PhSdon (1767), on the immortality of the soul; Jerusalem (1783), which advocates Judaism as the religion of reason; and Morgenstunden (1785) which argues for the rationality of belief in the existence of God.