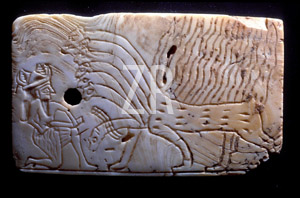 “3889. As early as Sumerian times, the image of a flaming monster with seven serpent heads appears in the near east. On this plaque, a Mesopotamian god, probably Ninurta, battles with the monster. Leviathan is the later Canaanite name for this creature, which is also endowed with seven heads, continuing the tradition. As late as Revelations 12:3, there is still reference to “”a great red dragon having seven heads and ten horns.””Provenance: southern Mesopotamia, Early Dynastic IIIb, circa 2450 B.C.”